Trends. Domain name investing is very often about profiting from trends. Many investors have made significant money from selling names in trending niches such as cryptocurrency, and CBD while some have even carved out a profitable corner by becoming experts in a specific domain extension.

One of the primary buyers of domains in alternative extensions, such as .CO or .IO is a startup. Alternative extensions to .COM prove to be popular because there’s more choice, and there’s a higher chance of getting a premium .whatever brand name to promote their business.

Companies such as Swipe (swipe.io), Feed (feed.co), and Generate (generate.co) have all adopted alternative extensions to get a more memorable left-of-the-dot experience. Are companies still opting for .CO and .IO over all others?

I’m going to take a look at some data on startups that have been founded in 2020 so far to see what extensions startups are using, to see whether there are any pieces of information that we can glean from it to help form decisions about our own investments.

The data collected is from Crunchbase Pro, collated using information from 991 companies that are listed as being founded between 1st January 2020 and 12th May 2020.

Categories of companies that seem to be popular this year are:

Amongst these 991 companies, there is a strong trend to using short, single-word company names. Some examples are Primer, Riot, Bliss, Matt, Trace, Unfair, Cerebral, and Dive.

Of the companies using single words, there are some creative domain choices since their exact-match .COM’s are likely either out of budget or in use. 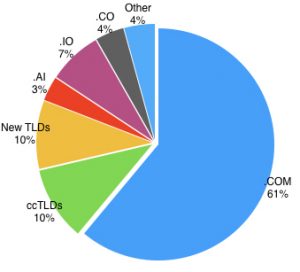 What extensions are startups using in 2020? It turns out that .COM is still king by a considerable margin. According to the data, 61% of companies founded in 2020 are using a .COM domain, followed on an individual scale by .IO, which accounts for 7% of the domains listed.

The .IO extension has been a firm favorite with startups for several years, causing prices at both wholesale and retail levels in the aftermarket to increase. In the past year, we’ve seen names such as Swipe.io, Cook.io, and Ease.io sell for five-figures a piece.

After this is the other traditional favorite amongst startups, .CO, relaunched in 2010, the .CO extension has been embraced by many startups as an alternative to .COM. From this list, though, only 4% of companies have chosen .CO.

The .AI extension, used predominantly by companies offering products or services relating to artificial intelligence, is used by 3% of companies.

In total, all new gTLD’s (such as .club, .xyz, and .app) account for 10% of domains, with .APP a heavy favorite amongst the new gTLD’s. Google’s new domain extension has obviously struck a chord with app makers.

ccTLD’s also account for 10%, with .IN highlighted for being used by 20 startups. Given the number of gaming-related startups launching at the moment, it’s surprising to see .GG adopted by just two startups. The ccTLD for Guernsey has been adopted as a gaming-centric extension.

The “Other” category in the graphic above accounts for data from extensions such as .NET, .ORG, and .TV. I was surprised to see that twelve startups opted for .NET. More than I thought.

Amongst these new gTLD’s, there are two companies using single-letter domains – R.estate, and Y.land. The shortest .COM domain used by companies in this list is Zext.com, owned, and operated by data scraping app Zext.

The mean average length for a domain in this list is nine characters, with the median average also listed as nine, and the modal average at eight. There are a few outliers in the data, skewing it slightly upwards thanks to the presence of domains such as this 31-character headache: MagnoliaStateMarketingSolutions.com.

If we take out .COM domains entirely, the mean average length for a domain drops to eight characters. Interestingly, amongst .IO names, the average drops to seven characters.

What does a startup do if it can’t get its true exact-match .COM domain, yet it still wants to operate on a .COM? According to this, they’re most likely to include the word “Get” in their company name. Names such as GetCerebral.com, GetQuin.com, and GetBoarded.com are all examples of this. The companies using the “Get” keyword look to either be offering an app, subscription, or service. There are twelve companies in total using “Get” keyword names.

Other than that, four companies are using “Join” as a keyword, such as JoinLumi.com, JoinPult.com, and even JoinPantheon.io.

Among .COM’s, some companies are using one-word names. Most notably is Results.com, which sold at Sedo earlier this year for $264,000. Other than that, Mentors.com is another highly popular name that is being put to use by a startup. According to DomainIQ, the name has been under privacy protection since 2017, but it did change nameservers in 2019, perhaps signifying either an outright acquisition or a lease deal.

I’ve also noticed a surprising number of two-word .COM names in use. There are countless examples of this in the data. PayWoke.com, WebRoot.com, SumPixel.com, RainTail.com, PostHog.com. I could go on. Could the formulation of two dictionary words as a brand name be a new trend?

To answer the original question in the title of this post, .COM is still widely used by startups founded in 2020, but the adoption rate for .COM has dropped. In 2017 and 2019, I wrote two articles for NamePros analyzing the .COM adoption rate for early-stage companies funded by 500 Startups and YCombinator, respectively. In these pieces, I found 67% and 66% .COM usage rates.

While this isn’t precisely the same kind of data set, it is still examining newly formed companies. A drop of 5-6% in .COM usage is relatively insignificant, but it shows that startups have more choice in 2020, with many opting for shorter .IO, .CO, .AI, or even choosing from the surplus of new TLD’s.