In the March edition of the Sedo sales roundup, I’m taking a look behind the numbers to see why five domain names sold for the prices they did at Sedo in March 2021.

Although this is a six-figure sale, it could be considered a low price for a three-number .COM. In 2015 and 2016, we routinely saw similar domain names selling for higher in the six-figure range, thanks to demand from Chinese domain investors.

The domain was acquired by someone from China, although I’m not sure of the buyer’s identity at the moment. Numeric domains, in particular, have been sold off recently as many investors are looking to cryptocurrency for greater returns.

After selling Kitchen.co for €70,000 last month, Sedo is back again with another strong .CO sale. This time, the marketplace is back with the sale of UM.co.

According to WHOIS, the domain was sold by Sedo on behalf of the owner of a portfolio that contains tens of premium and short .CO domain names in particular.

The buyer of UM.co was UberMedia, a company that specializes in aggregating mobile location data.

It seems like UberMedia may be rebranding to UM, based on an internal UberMedia.com page that I found. As of writing, UberMedia is not using UM.co to host a website, but the company is already using the domain for email.

The .IO extension is hot. We’ve recently seen Metaverse.io sell for $175,000, and Trade.io reportedly sold for $88,000. Behind those two sales is now Swap.io at $50,000. This is the largest publicly-disclosed .IO sale that Sedo has handled to date.

According to Archive.org, Swap.io was parked at Sedo at the end of last year, which likely informed the buyer that the domain name was available for sale.

Germanium is a chemical element, according to Google. It doesn’t seem like a word that is used as a brand name very often. In fact, LinkedIn only shows 17 company results for “germanium.” Despite this, Germanium.com sold for $45,000.

Osmium Institut was created to “ensure a standardized trade with crystallized Osmium,” according to the company’s website. The company likely acquired the domain name to set up a similar venture or organization to standardize the trade of germanium, which has uses within fiber optics, infrared optics, and LEDs, according to Wikipedia.

I’ve highlighted this domain name to show the power of an exact-match domain and the power of product popularity. PPE, Personal Protective Equipment, is a term that has become commonly used thanks to the COVID-19 pandemic.

Google Trends backs this up with data showing a spike in PPE-related searches in April 2020, just as most of the world was struggling to contain COVID-19. 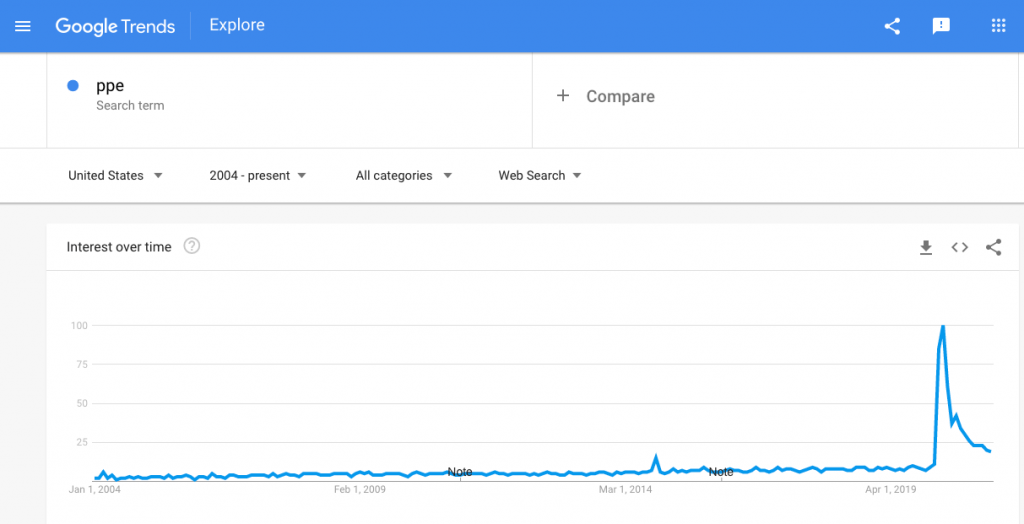 Although .US is the ccTLD for the United States, adoption isn’t wide at all, with most U.S. businesses opting for .COM instead.

PPE.us was acquired by iPromo LLC, a company that offers promotional products for businesses.

During the pandemic, iPromo has pivoted to supply PPE to health professionals under the brand name iHealth. The company has acquired PPE.us to highlight its PPE products. As of writing, PPE.us redirects visitors to iPromo’s PPE page. I can’t imagine that PPE.us gets much type-in traffic, so I would expect iPromo to develop this domain name and take advantage of the search traffic for PPE.

If you’re interested in selling a domain name, Sedo is taking applications for its upcoming Great Domains auction (April 15-22, 2021).