Facebook has acquired another premium domain name to add to its portfolio that includes FB.com, i.org, and F8.com. An updated WHOIS listing shows that the social media giant has now become the registrant for Bulletin.com.

News of Facebook’s possible purchase of Bulletin.com broke at the end of May, when Jamie Zoch noticed that the Bulletin.com domain had seemingly sold:

Premium domain name Bulletin․com appears to have sold and the domain moved to privacy at GoDaddy. Hogan Lovells (Paris) LLP was displayed briefly prior to privacy and were the potential buyers. To note, Facebook often uses Lovells pic.twitter.com/2AYs49SgHf

At the time, the domain was registered to Hogan Lovells LLP, a Parisian legal firm that is known to represent Facebook for its intellectual property acquisitions. An updated WHOIS record now shows that Bulletin.com has been transferred to Facebook’s ownership, confirming speculation: 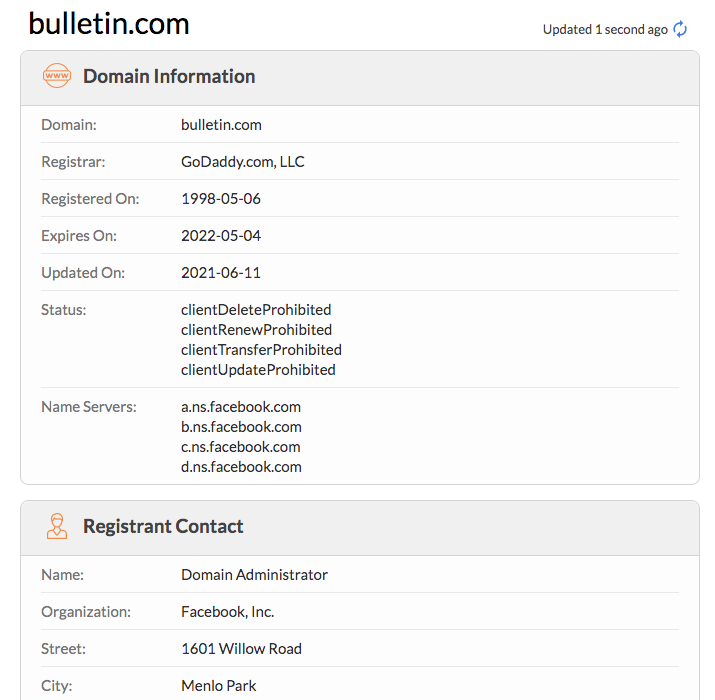 A recent article from Recode, which I reported on, speculated that Facebook paid in excess of $6 million for Bulletin.com, which is reportedly due to host a Facebook subscription newsletter project named Bulletin. A specific figure hasn’t been confirmed, but Facebook hasn’t been afraid to spend big bucks to get a domain name. Notably, it acquired FB.com for $8.5 million in 2011.