In the fourth quarter of 2021, running from October 1 to December 31, 802 companies and solopreneurs added projects to Crunchbase, one of the largest databases for startup and established company data. Fortunately for this article, Crunchbase data includes domain names, which meant I was able to take a look at the type of domain names startups used in Q4 of 2021.

Of the 802 company listings analyzed, it’s no surprise to see that .com is the dominant extension. On the graph below, we can see that .com accounts for 60.85% of all domains in our sample size.

Beyond .com, the extension usage is varied. This graph shows the top 20 domain extensions used. 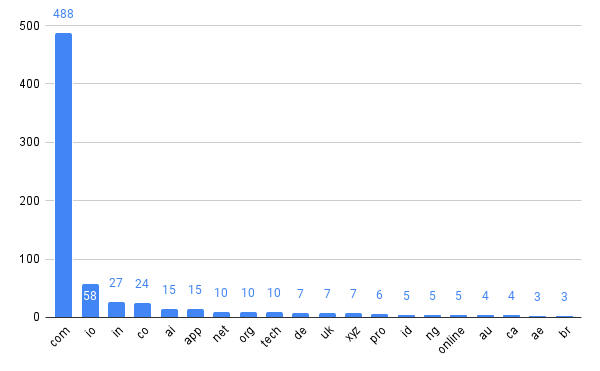 As you can see, aside from .com, the most popular extension is .io, with 7.23% usage. Beyond .com and .io, extension usage seems to be varied. Despite the popularity of the .xyz extension in 2021, my data shows just 7 newly formed companies using .xyz.

We can also see very few occurrences of the newer crop of gTLDs, including .app, .tech, and .online.

With newly formed companies, we tend to see longer domain names. A premium, shorter domain is something we usually see a company upgrade to later in their lifecycle. Newer companies often, rightly, overlook a potentially expensive domain to focus time and funds on developing their product and proof of concept. 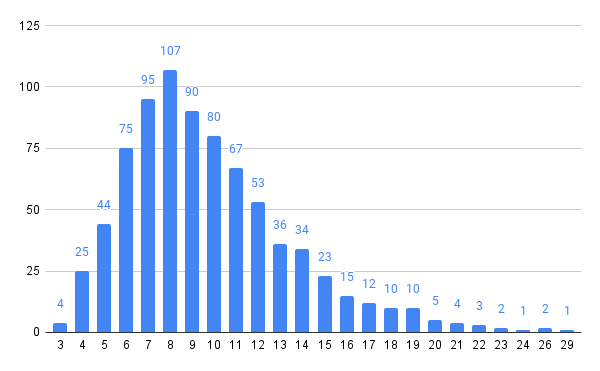 As you might expect, the average character length of a domain name (excluding the extension) is longer than we’d see in a similar data set for established, well-funded companies. In most cases, domain names here are between 7 and 9 characters, with some even stretching into the 20+ character category.

Before performing this analysis, my expectation was to see .com domains as the extension with the longest domains. Given that .com is the dominant extension and the fact that many companies will add prefixes and suffixes to find an available domain (for example, a startup called Flare is using TryFlare.com), .com’s average length is likely to be longer. 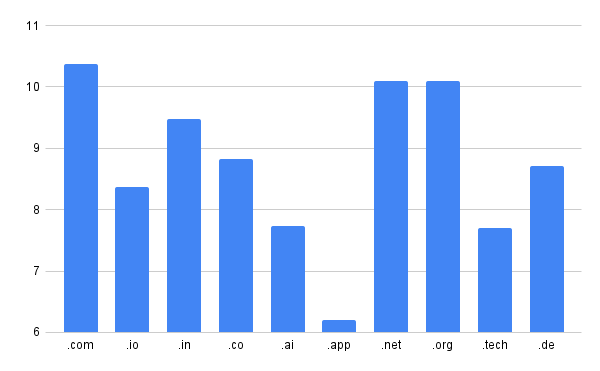 Here are a few notable domain names that I found during my analysis.